Water, getting wet (except when he's a merpup), being sprayed by Marshall

Rocky is a male mixed breed Eco Pup. He is one of the main protagonists of the PAW Patrol. It is unknown what his true breeds are. His primary purpose is to use recycled items to fix broken objects such as water towers and soccer goals.

Rocky is a recycling pup. His main color is green. He is a hybrid/mix-breed Eco pup who always has something to fix a problem. Rocky uses his handy claw to pick up pieces that could be recycled and use them for other purposes.

Rocky is a mix-breed pup that always has handy resources. He's an enthusiastic recycling dog with a thousand ideas and tools inside of his pup pack.

Rocky is a clever Eco-puppy. He reduces, reuses, and recycles anything he can find. However, Rocky has aquaphobia (fear of water). Sometimes, he has to face his fear, but he never seems to overcome it. However, he accepts being wet whenever he is turned into a mer-pup.

Rocky is grey with white paws, a white tip on his tail, and white tips on the fur tufts on his face, along with a darker gray circle around his left eye and two circles on his back. He has a black nose and orange-ish brown eyes. He also has a floppy right ear.

Rocky's pup pack contains a screwdriver and claw/pincer. It also contains a variety of other tools, such as a glue bottle, coil of adhesive tape, spatula, and many others.

His Mission PAW pup pack contains a radar scanner that can locate pups such as Chase, as shown in "Mission PAW: Quest for the Crown".

His Sea Patrol Pup Pack carries a rescue buoy, and a metal detector, which he uses, despite his aquaphobia, to locate the lost rattle of the baby octopus after it was knocked underwater in "Sea Patrol: Pups Save a Baby Octopus". His Pup Pack when in his scuba gear carries a welding tool, which he uses to help secure the new support for the Adventure Beach pier in "Sea Patrol: Pups Save the Pier".

Rocky's recycling truck is a green vehicle which is used to recycle items. Rocky also uses this as his pup-house, which can be used to store various items to use during missions. His truck also has 2 pallet loaders to load various things, such as the Lookout cake in "Pups Take the Cake". In Season 3, Rocky's recycling truck has been upgraded to transform into a tugboat, and used for water missions. His vehicle number is 05.

With his new duties as a lifeguard and member of the Sea Patrol protecting Adventure Beach, Rocky was given a new all-terrain vehicle that can be driven on the surface or under the water, or on land. His vehicle comes complete with an airlock in the back that either he, or another pup, can use to change into their scuba gear to help out underwater.

Rocky has a recycling truck (as mentioned above) that contains a bountiful collection of used, old items that he would use to build something new. He also uses the recycled items as parts in order to repair an object. Rocky's claw helps him build things and pick them up. His pup pack contains glue which he can retrieve by barking. 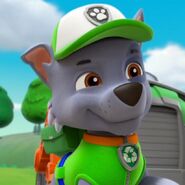 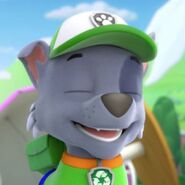 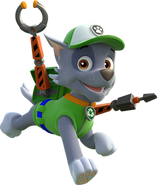 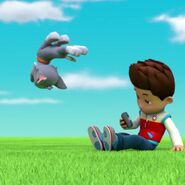 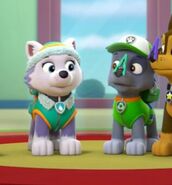 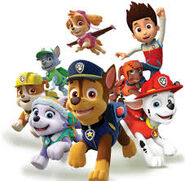 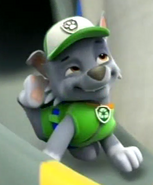 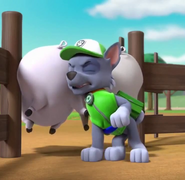 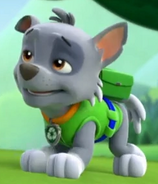 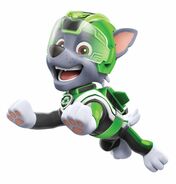 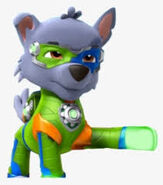