Adventures of the PAW Patrol 2 Wiki
Register
Don't have an account?
Sign In
Advertisement
in: Characters, Recurring Humans, Male Humans,
and 6 more

View source
watch 01:36
We're Getting Mutants in the MCU - The Loop
Do you like this video?
Play Sound

When his stunts go wrong or gets ruined, being warned by the PAW Patrol, being called "Danny" instead of "Daring Danny X", bears

Danny (who prefers to be referred to as Daring Danny X) is a 13-year-old boy who made his debut in "Pups Save Daring Danny X". He was motivated to become a daredevil by a stunt Ryder performed during a rescue.

He was an ordinary kid until seeing Ryder jump over the shore riding his ATV. Since then, he modified his trike to go extra fast and perform dangerous jumps, and he gained the courage to attempt such stunts. He also modified his snowboard in "Pups Bear-ly Save Danny". His biggest endeavor was to jump over Rattlesnake canyon, however he failed and was rescued by the PAW Patrol. He can be somewhat reckless due to his daredevil attitude and personality. As a result, he often has to be rescued by Ryder and the PAW Patrol. He also has a tendency to ignore advice about the danger of his stunts from others, a tendency others (such as Ryder and Mayor Goodway) find annoying.

Danny has pale skin with freckles, brown eyes and messy orange-red hair. He wears a yellow orange shirt with a huge X in the center, a bracelet on both wrists, faded blue pants and black boots. Danny also has a black and red helmet with yellow X's on the side and center. 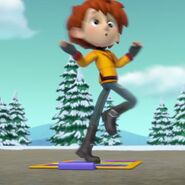